I’ve moved to Columbia, Mo to start a master’s in journalism at the University of Missouri. Over the last two weeks, I unpacked boxes, learned to navigate around the city and participated in a journalism boot camp (a two week intensive class designed for students who don’t have newsroom experience). As boot camp draws to a close, I will be plunging into a busy semester of coursework. Once again, I am a full-time student!
Here is a link to my first article at the Columbia Missourian. It’s about heading back to school.
Posted by Emilie Stigliani at 4:19 PM No comments:

Final Poem of the Summer 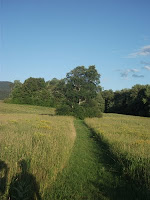 This is the last poem I wrote for the Bread Loaf Poetry Workshop. The professor assigned us to write about a public event. I chose to write about Chernobyl and the effect it had across Europe. My family arrived in Austria just months before the explosion and was among those anxiously waiting for the plume to pass. I was only a year old at the time, so I learned about the disaster from the stories my father told. It has become a powerful reminder to me that environmental issues know no borders.


Chernobyl
for my father
It was one of few threats
that made good
and floated freely
from East to West
over the ideological curtain
into sandboxes
and psyches.
The news rumored rain,
and the Austrians
scanned the sky,
spoke in low voices,
said,
Boiling won’t do any good.
Buy mineralwasser.
Each slight headache
was suspect,
and thousands of miles away,
firefighters lay ill,
shitting confusion
with constellations in their eyes
that burned unnatural.
Weeks later,
the playground reopened
and children tied the red plastic ribbons
that read verboten
to the tails of their kites
that flapped high
in the fleeting cloudless sky.
Posted by Emilie Stigliani at 4:52 PM No comments: