This spring semester, I set a goal for myself of leading a more balanced and healthy life. I had pushed myself too hard in schoolwork last semester and my overall happiness suffered.

I started working on my goal by scheduling a visit with my doctor to make sure nothing was physically wrong with me. He assured me that I was healthy.

With health concerns out of the way, I gave serious thought to what sort of life I want to lead. I knew that it involved meaningful work but also family, friends, creative pursuits, exercise, good food and relaxation.

I also realized that there were no excuses. This semester, I'm busy but not as busy as the past fall. I also have more money. Earning money has never been a primary motivation of mine, and, therefore, I've lived frugally. I recall a lean month in New York City where two meals a day consisted of lentils and rice. I've taken on a half-time position as a teaching assistant, which has doubled my pay. What has surprised me the most is the security I feel with a little extra income. It has also allowed me to buy good food and pay for some extracurricular activities.

So, here's what I'm up to. I'm springing on pricier items at the grocery store, like greek yogurt and organic frozen blackberries. I purchased a permanent locker at the campus gym and  an exercise class pass. Now, I'm in the habit of swimming twice and going to three Pilates or yoga classes a week. I've also put my name on the waiting list for a six week weaving class that's held on the same block that I live on. I'm making a concerted effort to spend time socializing outside of school — going for walks and out for lunch or drinks. I'm also starting a creative writing workshop with a poet friend of mine. We'll meet next week for the first time. Finally, I began a three-week biofeedback workshop. The first class was this afternoon.

Here's the deal with biofeedback: Basically, you put a sensor on your earlobe and connect it to a computer that has a heart monitor program, which will chart your heartbeats and then analyze whether or not your parasympathetic (the part that responds to external stimuli) and autonomic (the part that monitors the function of your organs) nervous systems are balanced—the instructor used the word "coherence."

When I started the monitor, my coherence level was pretty shaky. The instructor told us to do some deep breathing, so I began to breathe the way I do when I practice yoga. It was magic! My coherence line evened out and entered a quadrant the computer labeled "the zone." After about five minutes, the instructor stopped us to answer questions. I felt completely relaxed.

I'll attend two more sessions on biofeedback, and I'm supposed do two to eight 15-minute practice sessions on my own where I'll put the sensor on my ear, hook up to a computer and breathe. 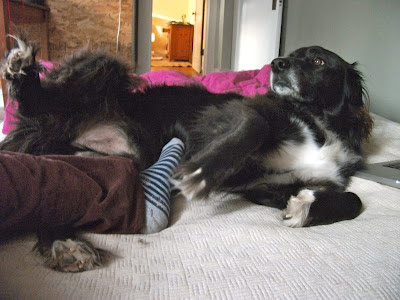 When the session ended, I ran a few errands and headed home where Leo was waiting. We snuggled for a little while, both breathing deep into our bellies.
Posted by Emilie Stigliani at 4:34 PM 4 comments:

Something's taken hold of me. It's happened slowly, but this afternoon I realized that I am turning into Martha Stewart.

I can trace the beginning of this change to fall 2011. I started having this unexplainable urge to knit socks. With my graduate school workload, there wasn't really time, but I managed to make one pair before Christmas and quickly finished a second during the break. Right now, I'm about halfway through a third pair — only I'm not even making them with anyone particular in mind.

Another change is that I've been getting really excited about dreaming up gifts to give to people. I've never sent as many packages as I have in the past few months. I don't give away expensive things. It's usually something I've put a great deal of thought into and has a homemade element.

Today, I wanted to make something for two friends who will celebrate their birthdays this week. I decided that the perfect gift for a busy graduate student would be homemade cinnamon, blueberry granola bars. I went out and got a few ingredients that I didn't have at home and then set to work.


What surprises me is that I thought I would spend the majority of my free Mondays writing. I do write (I've actually been writing for half an hour first thing each morning.), but so far I have been wanting to spend my Mondays on household pursuits rather than cerebral activities.

Maybe it's a life shift. I turn 27 in April and the biological clock could be sounding its alarm.
Posted by Emilie Stigliani at 4:23 PM 5 comments:

It's a snowy Valentine's eve and another Monday that I've had more or less to myself. 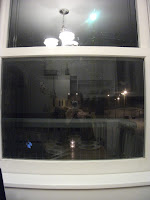 I started my day with Leo and the loop around Stephen's Park followed by a quick trip to campus where I dropped off a stack of graded papers (Whew!), swam some laps at the pool and went to a doctor's appointment where I was reassured that I was healthy and "probably would be my entire life." (I'll take that diagnosis.)

After a quick coffee break with a friend who just got back to town, I headed to the grocery store to pick up soup ingredients. I settled on carrot-ginger and asparagus soups, purchased a 5-pound bag of carrots, a knob of ginger and 2 pounds of asparagus and headed home where I kicked into nesting mode — sweeping the floor, washing the sheets and simmering vegetables. 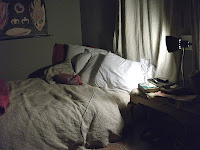 Satisfied with my housework, I moved on to homework and a glass of wine. I'm in the habit tipping the bottle before dinner, when I can. It makes me feel European. 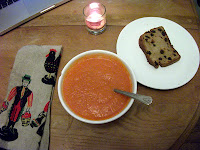 And finally, I sat down to dinner.

No Valentine this year, but it can be cozy to spend an afternoon home alone.
Posted by Emilie Stigliani at 5:48 PM 2 comments:

At least the weather does.

This semester, Mondays are catch-up-and-get-ahead days. I don't have classes, so I work from home at a leisurely pace and get ready for the week.
I was hoping for nice weather so that I could spend part of the day outside and  was promised 60 degrees and sunshine. Instead, I woke up to freezing fog. 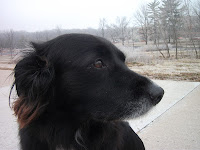 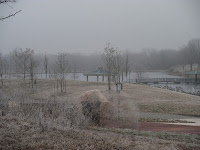 Disappointed but undaunted, I dressed warmly and took Leo for our usual 50-minute walk around Stephen's Lake. We didn't see anyone at the park and the gray skies and frosted trees were gloomy.
I returned home, made a pot of tea and crawled into bed to tend to my emails. 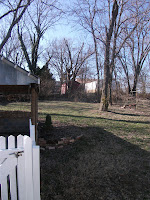 This afternoon, I'll walk downtown to mail a package and pick up Claire's car from the auto-repair shop. I'm happy to report that the sun is now shining.
Stay tuned for more blog posts. I'm going to try to make it a Monday habit.
Posted by Emilie Stigliani at 12:55 PM No comments: