This will be short because it's been a busy week of paper writing and visitors. On Friday, I spent 14 hours in the library writing a paper on how sound technology influenced Virginia Woolf's representations of sound within her novels Mrs. Dalloway, To the Lighthouse and The Waves (and I'll do it all over again next weekend with another long research paper).

I pushed to finish the paper so that I could get the bulk of my work out of the way before my visitors arrived. On Saturday, my Aunt Jani came to see me from the New York side of Lake Champlain. We had great conversation over a cup of chocolate mousse and lattes in Middlebury, and then we headed up to Bread Loaf to walk around the campus.

After Jani left I prepared a costume for the annual "suppressed desires" dance that took place that night. My desire was to be J.B. Fletcher from Murder, She Wrote. A friend of mine picked up a wig, and I borrowed glasses from another friend. I got all dressed up and fell asleep while waiting for the dance to begin. When I awoke, I was still in full costume and the clock read 10:30 p.m. I ran to the barn, where dances are held, and caught the tail end of the costume award ceremony.  After making a lap around the dance floor to look at all the other characters, I went back to bed.


Today, I woke up early and did homework before breakfast. I caught a ride down to Middlebury in the mid-morning and met my good friend Christine for lunch, shopping and ice cream. I found a colorful batik dress on sale and loved it so much that I wore it right out of the store.


I got back to campus in time for a short nap before serving dinner. It's been a good weekend, and I'm wiped out.
Posted by Emilie Stigliani at 5:55 PM No comments:

I can't remember having as much fun on a consistent basis as I had this weekend. It will live in my memory over the coming months and give me strength to push through the difficult graduate work I have ahead of me.

It started with a morning tour of the Robert Frost Interpretive Trail. John Elder, a Bread Loaf professor and Frost scholar, guided the tour. He knows a great deal about the native plants and history of Vermont and how they relate to Frost's poetry. He also told a story about giving the Dalai Lama a tour of the same trail we were walking on when he visited Middlebury College. Elder said that a group of reporters followed them onto the trial and one picked a sugar maple leaf, the native leave of Vermont, thrust it into the Dalai Lama's hand and started snapping pictures. Elder was nervous because you aren't supposed touch the Dalai Lama and because it was very intrusive. The Dalai Lama looked at the leaf for a second and said to the reporter, "Transcendence." Then he walked on.

But the story continued. As Elder and the Dalai Lama were crossing a bridge, they bumped into one of Robert Frost's dear friends who happened to be a Rabbi. Elder knew the man because of his interest in Frost. The Rabbi met them in the middle of the bridge and said to Elder, "So that's the Dalai Lama?"

Elder remarked that the photographer was gone by the time this interaction occurred, but it would have made a far more interesting picture than the Dalai Lama with a maple leaf. I want to remember this story when I return to reporting next month.

Along the walk, we came to a fork in the trail that was marked with a plaque of Frost's "The Road Not Taken" and an arrow pointing us to the left. 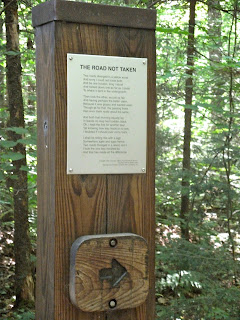 A friend of mine wondered if this wasn't some sign that we should actually not take the route directed by the arrow. We didn't.

In the afternoon, I went with another friend to the nearby town of Bristol. We spent the afternoon working at the bakery/coffeeshop. Then we headed into the town of Starksboro, where she is renting a room for the summer. One look at the place she is staying and I fell in love.
We ate peanut butter and jelly sandwiches on the back deck and then walked into the garden and noshed on the plump blueberries. 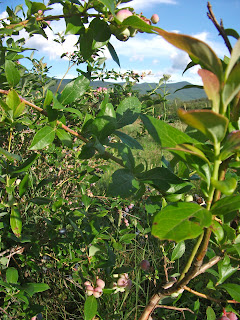 My friend mentioned that her landlord was thinking about selling the house in a year or two. For the last two nights I've been dreaming of living there. I'm definitely adding the Vermont area to where I might settle down after Missouri.

After dinner we headed back into Bristol to meet another friend at a small-batch, homemade ice cream shop. They make fresh flavors every day based on what's in season and on hand. They are also very generous with samples. The cappuccino crunch and peach honey flavors were delicious, but I settled on a bowl of curry peanut flavored ice cream. It sounds like a strange combination, but the savory, salty and sweet are too good for words.

That expedition was a precursor to an abridge comedic production of Antony and Cleopatra  that was taking place in a small barn on the property of an inn/restaurant. We were encouraged to buy a bottle of wine and drink it during the play, which we did.
The production was lovely and entirely entertaining. All the actors were over 50 years old, but wore silly makeshift costumes (the comb on Antony's helmet was made from a broom) and danced around the stage. The scene where Antony and Cleopatra were supposed to sleep together culminated with Cleopatra pulling a box of pizza from under the bed and both actors passionately eating massive slices of the pie. I laughed a lot.


The next morning I busied myself with research for one of my final papers. I am reading about how the introduction of sound technology changed the way literature described sound and provided a new vocabulary to discuss sound. It's fascinating. Hours passed and the morning turned into the afternoon. At 4 p.m. a friend of mine firmly told me that I was done for the day. He said, "Close the book. We're going for a hike and a swim."

He failed to explain exactly what that entailed, but I quickly changed into my swimsuit and sandals and met the group at their car. We drove a few miles down the mountain and then parked on the side of the road and picked our way carefully further down the side of the mountain. There was no trail, so when I we got to the river below, we started walking  in it. The river cut between towering rocks that stood like shards of ice. Courageous pines clung with their roots to the rocks and grew outward at odd angles. Eventually we arrived at a point where there was a 15 foot waterfall that we needed to jump down in order to continue.

That was only preparation for the 25 foot one that we would come to after 30 minutes of walking. We we got to the final waterfall, we stood and looked down at the white water churning in the deep pool below. The three guys jumped and I stood for just a second and then plunged. It was exhilarating. When we popped up we made our way to a rock scramble and climbed a near vertical wall of rock that had lots of little ledges. When we we reached the top, we walked back on the road to our car and arrived on campus just in time for dinner.

After dinner, I met two more friends to share some hard cider and after one glass, we headed to the campus barn for the Saturday night dance. It was Motown night and I danced for two hours to the music of The Temptations and The Jackson Five.

I went to bed utterly exhausted and fulfilled. I hope these pictures portray all the color and joy that I experienced this weekend.

Oh, I almost forgot. In between all the fun and activity, I finally finished the last sock of the two pairs that I've been knitting as a wedding present for a friend. I am incredibly happy with the way they turned out and am a bit like a child bringing their picture home to be hung on the frig. I don't think this friend looks at my blog, so I am taking the risk of posting my creations here.

Communing with a poet

It's been an entire week of attempting but failing to set aside time to write, for myself. I did a lot of writing for my classes; each had an essay due. Still, I've had a nagging urge to pen a little poetry or a short story. The wilderness that surrounds Bread Loaf seems to provide a quiet beauty that stirs my desire for creativity. The problem is that between classes, waiting on tables and spending time with the many interesting people who are also on Bread Loaf Mountain, the days pass and my writing pad remains un-inked.

In lieu of writing, I visited Robert Frost's cabin where he spent the final 40 summers of his life. Each year, Bread Loaf opens the house to its students and throws a picnic. Inside, I examined Frost's cups, orange juicer, icebox (that's really what it was, not a frig) and books. Then I plopped down in Frost's chair and silently petitioned him to send beautiful words to fill my pages. My hope is to carve out time this evening to find out if I was heard.

Email ThisBlogThis!Share to TwitterShare to FacebookShare to Pinterest
Labels: Learning, Reflections on Nature and City Life

Vermont: Where all things quaint and cute live

It's been a busy week in Vermont (my first batch of papers will be due in a few days), but I've managed to find time to enjoy some of its charms. Vermont has such an earthy, rustic, friendly feel. If I could give the state its motto, it would be: Everything's cuter in Vermont. Here's the evidence.

I've been at Bread Loaf for just one week, and I've already settled into a routine. This is the kind of place where establishing a routine is easy, or maybe I'm just happy and doing things that I like, which makes it easy to follow.

There's always something to do in the evenings — a reading to attend, a bottle of wine to share on the porch at sunset and a dance on Saturday night. I like those things. But, by 10 p.m., I'm ready to for bed.

I love mountain mornings — the cool air, the sunrise that slowly illuminates the green slopes and the bird songs. I wake up at 5 a.m. and my head feels clear. I've been writing for myself and letters to other people. I've been walking the trails.

I attribute this rhythm that I've fallen into as the consequence of being deeply satisfied with life.
Posted by Emilie Stigliani at 12:44 PM 2 comments: