I know Vermont best in the summer when I study at the Bread Loaf School English. The landscape is lush — verdant mountains, fields sprinkled with Indian paintbrush flowers, dark green mosses covering the rocks along the rivers, wide clearings with tiny flavor-packed low-bush blueberries. I wake up with the sun and get out of bed without hesitation. I go for a long walk almost every morning.

I wanted to revisit the Robert Frost Trail in fall to see how I felt. I thought I might feel unwelcome, like arriving early to a party and finding the host not fully dressed.

Here's what I saw. 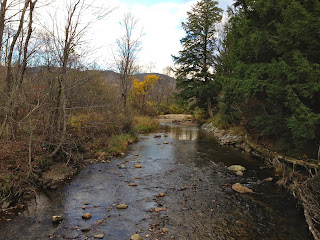 Rather than unwelcome, I felt an intimacy with the place. I know it dressed up in summer splendor and stripped down to rock and branch. Both beautiful.

Posted by Emilie Stigliani at 7:42 AM No comments:

Email ThisBlogThis!Share to TwitterShare to FacebookShare to Pinterest
Labels: Life's an Adventure, Reflections on Nature and City Life

O hushed October morning mild,
Thy leaves have ripened to the fall;
Tomorrow’s wind, if it be wild,
Should waste them all.
[...]

This hush has permeated my being. I've been sleeping more, sending letters, taking long slow walks, appreciating the filtered sunlight. 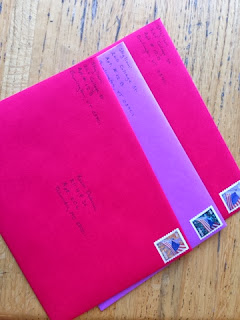 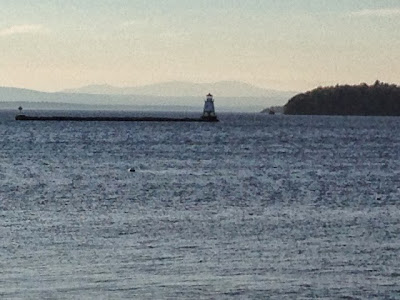 Late, but just in time

I worked until 8 p.m. Friday and immediately got on the road to drive four hours south so that I would have a manageable five hour drive to Gettysburg the next morning, and arrive with an hour to spare for the wedding ceremony of my grad school friends.
Everything went as planned (aside from the scary motel room next door to a group of bikers) until I drove through a small town about 45 miles from Gettysburg. At a stoplight I decided to be good and not take my left turn on the yellow.
The light turned red and a old man in a bright orange safety vest marched out from the sidewalk and placed an orange traffic cone in front of my car. He then walked up to my window and knocked.
"Dear, you're going to have to wait a few minutes. There's a parade coming through," he said when I rolled down my window.
The light changed three times; nothing happened.
And then I saw an ant-like army coming over a distant hill. As the parade moved closer I heard the honks and saw the POW flags. Turns out, the parade of motorcycles took five minutes to pass and I would follow it all the way to Gettysburg.
I arrived at the church a half hour after the ceremony started instead of the planned hour ahead of time. I did get there in time for the vows, which I heard thanks to the somewhat unnerving presence of a speaker installed in the bathroom. (I had been holding my bladder for the final leg of the journey so as not to lose any more time.)
After the dinner, and a quick conversation with the newlyweds, I drove the four hours to Pittsburgh. I spent the night with my sister Claire and the furry Leo. The next day we did some shopping in an old grocery district of the city, ate breakfast at a Jewish deli and visited Claire's sky-lighted office at Carnegie Mellon, where she now teaches.
The visit was too short, but knowing that I had to get back for work, I loaded up the car with all my things Claire had moved from Missouri (including winter coats, and less useful items like a table loom and a box of my childhood dolls).
I drove 12 hours straight and arrived in Burlington at 1 a.m., so exhausted that I actually walked into a wall in my apartment.
Although I worked a full week, I've had little energy for anything extra (aside from yoga classes which helped loosen my stiff neck). I slept 14 hours from Friday to Saturday afternoon. I feel pretty good this morning and happily return to my blog posting.
Posted by Emilie Stigliani at 7:07 AM 2 comments: