St. Pat's grade school had weekly half-hour session of "silent reading" — something I didn't know how to do until I started at the school in fourth grade. That time of the week served as a welcome break from my teachers' lectures and navigating the complicated interactions between girls on the edge of adolescence.

Instead of reading though, I retreated into the silence, my own head. I daydreamed. I simulated reading with page turns but made no attempt to register words. The half hour always ended too soon.

After a busy week at my editors desk and anticipating another weekend away, I felt like lazing in the silence of my apartment. I went for my usual morning walks and picked up groceries for the week but spent most of my time at home. I played in the kitchen whipping up a batch of egg salad for lunches and wild rice and beans for dinners.

I also spent a good bit of time attempting to read silently. But snuggled onto my sheepskin covered sofa, drowsiness quickly overwhelmed me. Twice I woke up warm and relaxed with the golden late-afternoon light filling the room.

I didn't finish my book but feel complete anyway.
Posted by Emilie Stigliani at 6:45 PM 3 comments:

This post is a day late a line or two shorter than I'd like; I'm in a rush as I'm expected at work fully dressed and caffeinated in less than an hour.

It's been a silly, giddy, boozy weekend in Montpelier. I spent Saturday with my good friend and some of her good friends (who I'd like to think are my friends now too). We drank small batch local gin; ate at a trendy, highly-recommended restaurant called Salt; and stayed up late talking like junior-high girls. I got back to Burlington just in time to start cooking for my previously planned dinner party with a co-worker and her boyfriend.

I've had more than my share of delicious food, alcohol and conversation; and go to work happily.

My hard drive crashed and now I'm without a computing device for the next week. In its absence, I'm posting via my iPhone, which makes me feel like I have sausages for fingers.

In the interest of keeping typing to a minimum, I'm going to post two photos from the weekend--one of Maddie, Louis and Jani's very senior poodle mutt ( I to Essex, N.Y. for an overnight), and another of the sunny Burlington waterfront I returned to this morning. 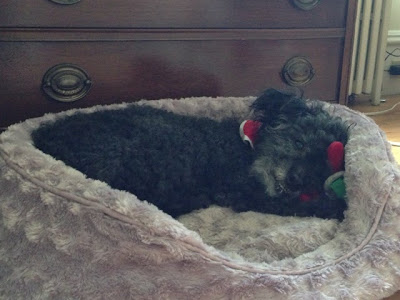 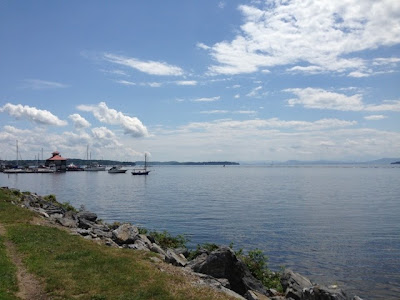 Email ThisBlogThis!Share to TwitterShare to FacebookShare to Pinterest
Labels: Family, Life's an Adventure

I've traded my Iowa license for one from Vermont. Despite living in Boston, New York and Missouri, I'd never registered to drive or vote anywhere but Iowa until now.

Joan Didion once spoke of retaining her California license even after living most of her life in New York City. The license became an important tie to the place where she was born and where her parents and grandparents lived. I feel similarly.

So what made me drive to the Department of Motor Vehicles before work one morning last week? It was a the desire to be fully involved in the community where I live (and in small part the fact that if an Iowa license holder leaves the state they have 30 days to register in their new state of residence, as I learned while renewing my license this May). But this change goes deeper than following the law and does not indicate a weakening connection with the state where I've spent the majority of my life and my parents, sister and grandmother still live.

Instead, it represents my desire to pay attention to community issues and have a vote in decisions. It also demonstrates my readiness to put down roots in a single place after shuffling around to different states and countries for a few months here and a few years there.

While attending Bread Loaf in Vermont last summer a teacher asked me and my classmates to describe where home is. I said that I wasn't quite sure where mine was, but it would be a place with a big bookshelf that I could fill. Up to now, I've been reluctant to acquire too many books for fear of eventually having to lug them to my next temporary home.

Since arriving in Vermont, I've been searching the Internet for a bookshelf to order when my paychecks start coming and dreaming of the books I'll collect.