This weekend I conducted a in-depth search of my Internet presence for an assignment in my investigative reporting class.

I wasn't surprised to find that I've left a virtual trail of blogs, photographs and published articles. But, I was pleasantly surprised by some things that turned up.

And here's a more recent picture of us. 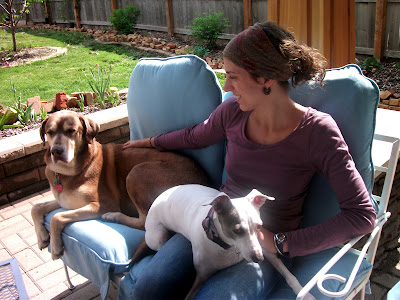 How varied is the life of a journalist?

Very, I was reminded this weekend. I started by attending a swanky luncheon award ceremony for the Missouri Press Association's Better Newspaper Contest. I dined on Chicken Cordon Bleu and chocolate mousse and took second place for the story I'd written about the Ozark Hellbender for the Columbia Missourian newspaper.

But, there was no time to polish my award plaque or even digest my meal. As soon as all the awards were handed out, I took off to work on the off-the-grid story I'm writing. I had scheduled an overnight to get the full experience.

I got what I was after. The residents and guest volunteers welcomed my arrival, and I was shown to my tent, which was the last vacancy and the furthest back in the woods. After setting up my camp, I joined the crew for dinner. We ate a burritos stuffed with solar oven cooked rice and beans and then sat around chatting as the sun went down and the temperature dropped.

The guys joked with me that I had picked a good night to stay because it was supposed to dip into the 30s. When the last light faded, the coyotes started howling. As I sipped my after-dinner hot chocolate, I did not relish the idea of going back to the outskirts of the camp. But, I was getting sleepy and decided that the trek out to my tent and the cold night was going to happen whether I dreaded it or not.

I bucked up and walked back with my headlight illuminating the forest path and stopped outside the tent to pee. Then, I went inside and zipped the door behind me. It was too cold to read the books I had brought, so I put the blankets over my head and wrapped them tightly around my legs. The last sounds I heard before falling asleep were the coyotes howling far off.

I woke with a start to the coyotes yipping at a close range. The neighbors cows were lowing loudly. I felt alert and listened to the leaves crackling and what sounded like something slithering beneath the wood slats that my tent rested upon. I also had to pee and I lay in anxious anticipation for the coyotes to quiet and I waited a long time even after that before unzipping the tent and crouching nearby.

I managed to go back to sleep and to stay reasonably warm until the sun rose. I did a little writing and reading before the triangle meal bell tinged. The crew and I ate puffy pillow-sized pancakes slather in butter and syrup and then headed to the straw bale construction site to sift clay.

The clay would eventually be mixed with water and sand and applied to the outside of the straw bale house. The three other volunteers and I took turns using a pick to loosen the soil and shovel it into buckets. The other three pushed the earth across two meth sieves in order to break up the clumps.

As we worked, we listened to "Lost and Found" radio. It played sappy ballads sung by a Norwegian songstress. When we tired of listening, we chatted about books, sleeping in the cold, the coyotes and anything else that came to mind during the two hours spent sifting before lunch.

The bell clinked again and we went up to the common area to eat leftover burritos at the picnic table. After lunch there was an uneventful community meeting and then we headed back down to the sifting site. Two hours later, our work was complete. We had filled five drums with sifted clay, which we estimated to be the equivalent of 60 five-gallon buckets.

With sore arms, raw fingers and dusty clothes, I bid my companions farewell until next weekend.
Posted by Emilie Stigliani at 5:17 PM No comments:

I'm working on long-form story about people who are living an off-the-grid lifestyle. This will take me off the grid for three upcoming weekends. Today was my first day of immersion.

My hosts were kind and welcoming and the conversation was pleasant. I told them that I wanted to participate in the activities that they had planned for the day. This got me four hours of applying mud plaster to a hay bale wall (with a lunch break in between).

I got mud on my clothes and skin, in my hair and eyes, and on the wall too. When I had the urge to pee, I went to the outhouse where my waste went into a compost bucket and the informational sign on the door directed me to add a few scoops of sawdust. I washed my hands under a thin stream of water that flowed from a spigot at the bottom of a bucket. For lunch, I ate mushrooms that my hosts had grown as well as store-bought foods.

When the day's work was done, I scraped the mud off my arms and I bid my hosts farewell until Saturday.

Mama and the pink pearls

I had a visit from my mother this weekend. It was perfect. We went for a walk and then spent most of the day in bed reading: I read my text books and Mama read for fun. We snoozed when we got tired and ate chevre, heirloom tomatoes and crackers when we were hungry.

We also were tempted into buying apples named Pink Pearl.

Bed bound, but not alone

I've been spending lots of time in bed. For one, I have a pile of books to plough through. Moreover, I've diagnosed myself with a stress fracture in my foot which makes it difficult to walk around.

Luckily, sometimes I have company.

Posted by Emilie Stigliani at 11:17 AM 2 comments: