Time to smell the flowers

Saturday afternoon, I finished the last big project of the semester. Although there is still one week of classes and then a week of finals, my work is done. I am easing into a slower summer pace where I have more choices on how I want to spend my time rather than tackling a list of tasks I have to get done. This evening, I chose to go for a walk and took time to smell and photograph the flowers.

Here are some of my favorites. 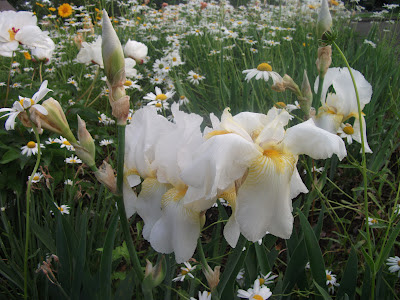 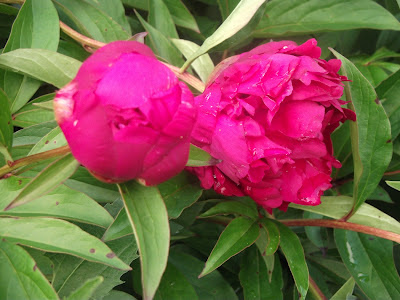 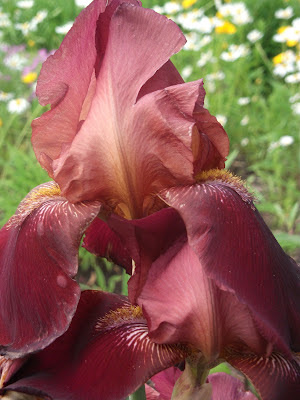 Seven weeks ago, I began a weaving class down the block from where I live. Tonight was the very last class. Over the course of the past Monday nights, I managed to weave my very first loom sampler. 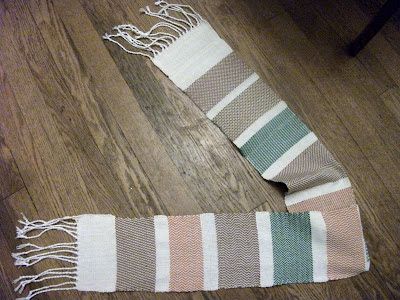 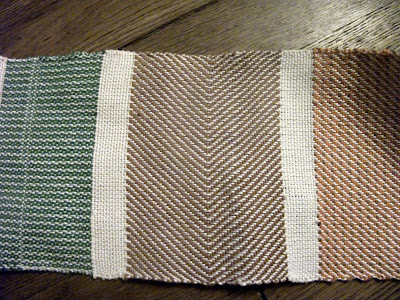 The class has been a mini reprieve from all the things I have going on in my my grad school life. I simply showed up for two hours and wove—creating pattens with color and by raising and lowering different threads. I didn't have to speak if I didn't want to. Working in silence was the norm.

I'm sad to see the class come to an end but happy to have summer draw near. I'm switching my focus to a more metaphorical act of weaving—stringing together my summer plans. They include a month in Cedar Falls, seven weeks at Bread Loaf, three days in NYC, a week in Essex, NY, and an overnight in Montreal. I'm looking forward to all the family and friends that will add color to these adventures.
Posted by Emilie Stigliani at 7:47 PM 1 comment:

Tomorrow's my birthday. My mother is here for a celebratory visit. Instead of writing, I thought I'd do "Emilie's Birthdays in Review."

That's the sound of a robin hitting the glass door of my bedroom. It's a sound that I'm starting to associate with time to wake up.
I'm not sure why the robin hits the door. At first I thought it was confused by the glass, but I quickly changed my mind. The robin will hit the door bounce back and hit it again. And it keeps going. It will hit the door five or six times, take a little break and return for more. This continues all morning.
Most of the time, I want to tell Mr. Robin (how I refer to him) that he better cut it out. It's annoying and I'm worried that he's going to get some sort of brain damage. Bird brains are small enough as it is.
But I'm also starting to understand him. I feel a bit like I'm trying to get to the other side of the semester. I'm so close but can't quite make it. At least not yet. There's four weeks left and all the final projects still need to be completed.
I'm focusing on each day as it arrives and taking my cues from Mr. Robin on what not to do.
Posted by Emilie Stigliani at 11:34 AM 2 comments:

It's the end of spring break, but I'm not complaining. The weather is in the 90s and there's only six more weeks of the semester left.

During these warm days, I've been thinking about my grandfather, Adrien Comeau. He was a true outdoorsman, and I mostly visited him (and my grandmother) during the summer months when his garden was in full bloom.

I've started a poetry workshop with a couple of friends. We meet every other week. For the upcoming meeting, I wrote a poem about Adrien (aka Poppy).

The Gardener
He had strong shoulders of a younger man
And dirt imprinted on his hands
Weathered the seasons and sameness,
Saying, Tomorrow, she’s gonna be a better day
Perhaps something he learned in the lumber camps
Or on the small farm where he was born
Perhaps something he learned from the ups and downs
Of the many women my grandmother tells me he used to date
Before he married her, built their house
And started the garden
Part wild strawberry, part bleeding heart
And always the tender shoots
That would grow tall, abundant
Enough to feed children and grandchildren
He will always be in the sun, in my mind
With an aluminum pan tucked under his arm
Reaching up the bean stalks
And plunking the pods — purple, speckled and deep green
Into the pot that’s already boiling
Posted by Emilie Stigliani at 12:12 PM 2 comments: