The week has passed too quickly.
Posted by Emilie Stigliani at 7:30 PM 1 comment:

Hibernation is the only way I can explain it.

I feel fine but have been sleeping an alarming number of hours. Once the sun sets, I yearn for bed. And once dinner is done, I go there straight away. Perhaps it's the ever earlier darkness or the warm cocoon of my apartment that lulls me.

I don't sleep immediately — I've gotten in the habit of watching an Australian mystery show on Netflix — but I drift off before the crime is solved.

"Shouldn't I be going out? Making friends? Meeting people? Working on my personal writing?" These questions surface in my dreamy state. I snuggle deeper under the covers, turn up my electric blanket and feel content to let them pass.

I've given myself until the new year to occupy this sleepy state. Then I'll kick off the covers and get back to life.

The podiatrist operated on my right foot just shy of one year ago and on the other in late May. Each recovery lasted eight weeks — two on bed rest and six on crutches. I've been back to my pre-surgery activities since late July but have not returned to running, which I abandoned in my early twenties.

With some trepidation, I agreed to accompany my friend Christine on Burlington's annual Santa run. She is an avid runner who regularly participates in all sorts of costumed races, which have included a superhero getup and a Christmas-lighted tutu. No longer a runner and never a silly costume sort of person, I dragged my feet about signing up and felt considerable anxiety once I did about being the slowest Santa on the course.

Christine, who lives across the lake, came over an hour and a half early. We picked up coffee in full costume and watched the crowd of Santas accumulate. 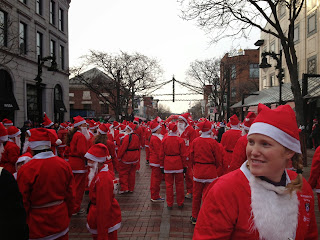 At 10 a.m., a voice boomed over the Christmas carols. The sea of red began bobbing down the street. We were off. 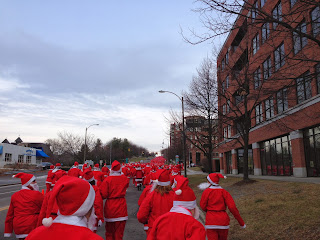 As I topped the first (and largest) hill, my anxiety about being too out of shape to run disappeared. I felt great. Absent was the throbbing pain in the bottom of my feet that I learned to tolerate in my running days.

I ran the whole 5K and crossed the finish line feeling a little lightheaded but mostly elated. 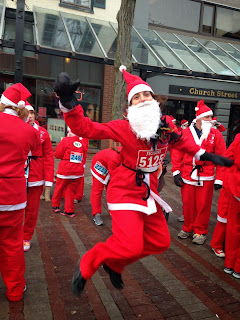