I've been away for yet another weekend — went across Lake Champlain to spend the night at my aunt and uncle's house. My cousin, who's close to my age, was visiting from Austin. We had played together as children, but I hadn't seen her in a few years. She and I went for a hike up Coon Mountain which we had done together before, a long time ago.

Then, the whole family went out to dinner. When we got home, no one was ready for bed. We settled in front of the fireplace for what turned out to be a very late night of remembering shared experiences and filling each other in on the paths we've taken since.
Posted by Emilie Stigliani at 8:35 PM No comments:

Email ThisBlogThis!Share to TwitterShare to FacebookShare to Pinterest
Labels: Family, Life's an Adventure

I love my one-bedroom corner apartment with seven-foot-tall windows, but haven't spent much time at home.

A series of trips have taken me away from Burlington throughout the month of August. I've spent time in Rochester and  Essex, N.Y., Putney and Middlebury, Vt., and most recently Quebec.

In anticipation of visitors coming to see me over the next weeks, I hunkered down in Burlington to rest and get a more acquainted with the city where I now live. The timing couldn't have been better because Burlington's South End Art Hop was taking place. The waterfront neighborhood's seemingly defunct warehouses are actually divided into a surprising number of studios, workshops (even a small artisan bagel shop) and sprawling antique stores. For the celebration, the maze of  studios and workshops were opened to the public, bands played, food vendors filled the street and a Ben & Jerry's truck gave away free ice cream.

Here's a picture of me in an installation art exhibit. 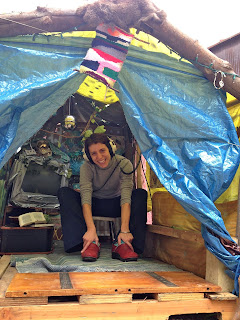 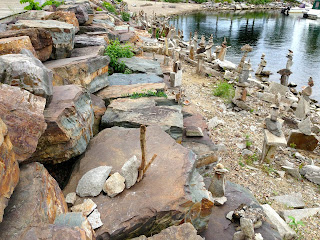 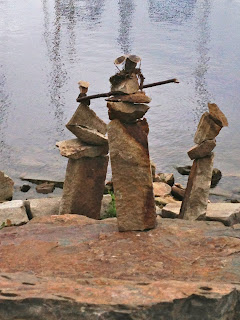 Email ThisBlogThis!Share to TwitterShare to FacebookShare to Pinterest
Labels: Life's an Adventure, Reflections on Nature and City Life

Je me souviens (I remember) appears on all the license plates in Quebec. My Uncle Louis pointed out the motto and translated the words for me while we were driving to our family's ancestral farmlands in the central Quebec municipality of Bécancour over Labor Day weekend.

He suggested that we, along with our Montreal-based second cousin who came too, were enacting this motto. I thought his suggestion wasn't quite accurate, for me at least, as I'd never been there. I had nothing to remember. I drove on.

Although the farmhouse where my grandmother grew up burned down a number of years ago and none of us knew where my grandfather's farm even was, we did find plenty of hints from the past.

We spent the day sightseeing the Catholic churches and cemeteries of the towns where my grandparents grew up, visiting our last remaining relative in my grandmother's town of St. Sylvere and eating Belgian-chocolate dipped ice creams the size of our heads. We even weaseled our way onto the farm where my grandmother grew up by buying eggs from the elderly farmer who now lives there. He took us around to see the chickens, goats and sheep.

I took the opportunity to photograph the barns that are still standing. 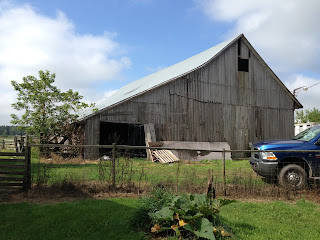 As we drove back to Montreal at the end of the day, I felt like I had a fuller understanding of who my grandparents were and what kind of legacy they have passed down tho their children and grandchildren. A legacy of simple living, hard work and commitment to family. I come from a family of good and honest people. My mind wandered back the "I remember" motto. Now, I do.